An earlier version of this article appeared in the April-June 2010 Sierra Club Rincon Group Newsletter.

For several years, a business columnist at the Arizona Daily Star regularly berated evaporative coolers as water wasters and outmoded technology. He said refrigeration was the way to go in the modern world. Many readers disagreed with him but they gave only qualitative arguments. We decided to see if we could find some quantitative data to compare the two systems. We put together our data on our own rooftop systems. One of us (Roy) has had only evaporative coolers since he came to Tucson in 1960. The second author (Russell) has a combined evap/air conditioner/heat pump unit.

Although evaporative coolers used to be the standard cooling device for Tucson homes, they are less common today, so a brief description of how they work is in order. You’ve probably noticed that even on a very hot summer day, when you come out of swimming pool you find yourself shivering. This is because it takes energy to evaporate water (or any liquid for that matter). This energy, called the latent heat of evaporation, comes from your body and cools it. The evap cooler uses the same principle. It is a box with a tank of water, pads of aspen fiber, corrugated paper, or composite (MasterCool), a pump to distribute water to wet the pads, and a blower fan to pull air in through the pads and force it into your house. The air is  cooled as it flows through the pads by the evaporating water. On a hot, dry summer day, this method of cooling is very effective; however, because less water evaporates when the air is more humid, these coolers are admittedly not as effective during the humid monsoon season.

Also, as you probably know, Tucson’s water contains lots of dissolved minerals. These minerals precipitate out on the cooler pads eventually making them useless. To combat this problem, the more modern coolers have pumps that empty out the water tank every eight or twelve hours of operation, thereby purging the salty water. This is good for cooler pad life but uses more water. Because this latter type of cooler is more  common today, we included the use of this pump in our experiment.

Refrigeration or “air conditioning” systems are based on the Joule-Thomson effect: a gas cools when it expands. For example, when you let air out of a tire, it is cool. Here a mechanical pump compresses a gas (usually Freon), which warms it. It then goes through a copper coil where air cools it until it condenses. The resulting liquid then flows through a small opening and expands, causing it to cool, and chill your house. 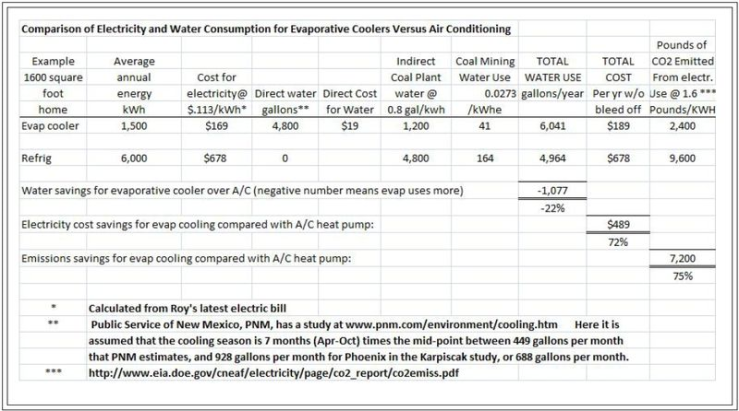 In the table above, we summarize the energy and water consumption of the two types of coolers. Since our electric bills are usually the first concern, we start there. Our data in column 2 are taken from a number of research papers. There is an amazing spread of water usage, almost a factor of ten, in usage for similar houses, so we have used mid-range values that would apply to Tucson. The $0.113/kWh (kilowatt hours)used in Column 3 for calculating the energy cost comes from dividing Roy’s last July bill of $42.91 by the 380 kWh used.

Next we determined the cost of the water used by the evap cooler. Tucson water has a lower rate ($1.39/ccf) for less than 15 ccf (hundred cubic feet – 748 gallons) and much more ($5.14/ccf) for over 15 ccf. We assumed that folks would use some amount of water that fell into the higher category, so estimated $3/ccf as a reasonable average. This results in the total cost for the two systems in Column 9.

The trickier part was figuring the total water usage, Columns 4, 6 and 9. It may come as a surprise, but air conditioning or heat pump refrigeration is not a water-free process. Water—lots of it— is used in the generation of electricity. You may have noted clouds of steam coming from the cooling towers at power plants. Much of the cooling water is recycled, but even so about 0.5 gallon of water is used to generate one kWh of electrical energy at the Tucson Electric power plants.

Hydropower is even more water consumptive, as a huge amount of water evaporates from the reservoir behind the power dam. Lakes Meade and Powell lose almost a million acre feet per year and although some of this must be budgeted to irrigation, recreation, and flood control, at least 4 gallons/kWh could be attributed to hydropower. Nuclear power is even more water intensive than coal plants. Since we are on the Western Power Grid, it is difficult to say what fraction of our local power comes from which source. Once again, we used an average, and calculated 0.8gal/kWh as a reasonable estimate.

There are also indirect water consumption and environmental factors associated with electricity that must be taken into account. Electricity production uses water in the coal and uranium mining process. Extraction of water at these mines often devastates the local environment around the mines. Another area of environmental impact is that of CO2 production. We address this in the last column of the Table. Here you can see that the evap uses so much less electricity that the CO2 impact is 75% lower than refrigeration.

The Table reflects these assumptions on energy and water consumption. It also compares the total energy and water consumption for a typical home in the Southwestern deserts. Depending on the assumptions, the results are quite variable. For example, if you predict that the energy costs per kilowatt-hour in this area are going to increase, which many energy analysts project, then the evap cooler gains favor. If you plan to buy a super-efficient A/C, then this option gains favor. We did assume a high efficiency A/C, but there are even higher efficiency units becoming available.

There are also other factors not considered in this analysis. For example, some people do better, health-wise, with an evaporative cooler, while others do better with A/C. All air contains bacteria, mold and fungi. These microorganisms can even be beneficial for your health, but some people have problems with the very dry air an A/C produces, while others have problems with the moister air an evap produces. To most people it does not seem to make that much difference, except that in the driest conditions, many people say they like the moisture of the evap for their skin, hair and overall health.

Ultimately, the data seem to suggest that environmentally evaporative is the better choice, but using A/C during the most humid times, and using the evap the rest of the time is still a responsible option. Perhaps the most important lesson is not to use either unnecessarily – turn down the thermostat. That didn’t used to be an option for the old evaportative coolers—they were either on or off—with a high or low option. The modern evaps, however, offer affordable thermostats which pre-wet your pads, turn the system on and off like an A/C thermostat, and allow you to program the hours of startup and shutdown. These thermostats let you further reduce your water and energy consumption.

What Can Homeownders Do to Reduce Energy and Water Consumption in Cooling Their Homes and Businesses?

Homeowners have several options if they want to reduce energy and water consumption and still cool their
homes during our hot summer months. If you are willing, like Roy, to weather the humidity, then the lowest cost option is the good ol’ evaporative cooler. If you aren’t quite that tough, you can do what Russell has done and install a “piggyback” unit, or cooler/heat-pump-A/C combo. This allows you to use the evaporative cooler during the drier months of April through June and September through October. It also allows you to use the evap during the drier parts of the days July through August. However, when the humidity increases and evap is no longer cooling efficiently, you can turn it off and the A/C on. If you do get a piggyback,

it is important to get a “barometric damper” which swings freely to open to whichever system you turn on. These allow you to not do anything but shut one system off and the other on. If you have a piggyback, you never want to run both systems at once (see picture of piggyback).

Home insulation is also important, especially with refrigeration. Some of the wide variations in experimental results for cooler energy use are no doubt due to the quality of the insulation of the house. Finally, note that in this article we are discussing retrofitting existing buildings. If you are building new, there are many ways to reduce your heating costs to nearly zero and greatly lower your refrigeration or evap consumption. But, that is another story—or at least another article!

For evaporative cooler water use:

Public Service of New Mexico, PNM, has a study at http://www.pnm.com/environment/cooling.htm

For general info on how evaps work: